Chapter One —They Meet 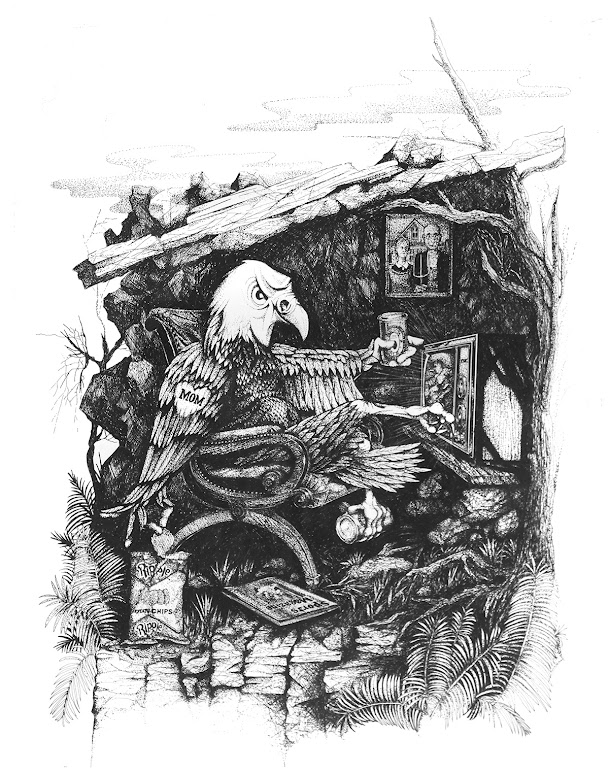 There’s more than one way to reach the top of one’s game. One can do so brashly, using natural talent to leap past others trying so hard to succeed.

But, there’s another way to win—by acquiring knowledge and growing wiser from each experience.

Some of us mature at an early age. For others of us, it takes time for our minds and bodies to develop and we often stumble on our journey.

There isn’t a right or wrong way of maturing. Each of us must learn to grow in our own way, and in our own time, using whatever attributes we’ve been given at birth, and the encouragement we receive from those around us throughout our lives.

Instinct  can only take one so far, before one experiences the world and takes the time to reflect on all that’s been learned in order to reached his or her full potential.

And so it was for the eagle who had a wingspan twice that of any other of his type. From early on he was confident in his destiny, because smaller eagles and other birds were in awe of his power and speed, and of his command of the air streams he followed as he cast a wide shadow on the villages and landscapes over which he traveled. He knew from an early age that he was special, and that other birds had little chance of competing with him. He watched as they struggled to find food and build nests that were safe from intruders, while he easily built his aerie to high for other creatures to reach.

For many years he was supreme among his peers, and could outperform all others without giving much thought to his dominance, and never considering why he’d become so supreme. He took it for granted that he would always be the best, never to be truly challenged by another. He had little fear that he would ever lose against another eagle, and certainly not to a lesser type of bird.

The eagle had now lived for many years, during which time he’d sired many young. He was tired of the game of searching for food, and nesting. And he troubled himself little about any bird of any kind outperforming him in any way. It was time to take a rest...to look around, and smell the roses, so to speak.

One day, while soaring low over a village not far from his nest, the eagle with his keen eyesight saw three pies cooling on the window sill of a small building. As he swooped down close to it, he saw that inside near the pies was a cage, in which a small brown bird sat on a swing, singing joyfully. The eagle, caring little about his entrance, landed roughly on the sill, knocking one of the pies to the floor inside the room.

The songbird stopped singing and addressed the eagle, “My dear! My dear! See what you have done! My master will be greatly displeased when he comes home.”

“So what of it?” scoffed the eagle, his large wings knocking a second pie fell to the ground outside before the eagle finally maneuvered his way inside and looked around. He saw pies on other windows sills and a large oven centered at the rear of the room. 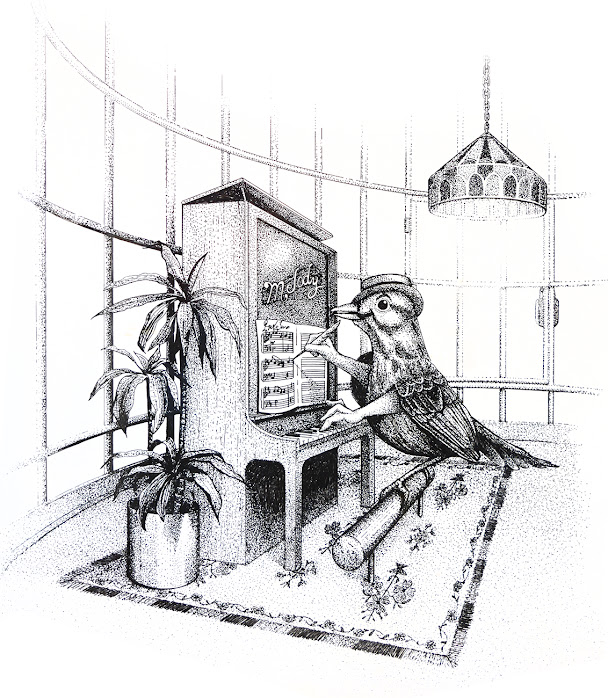 “What is this place?” he squawked.

“It’s my master’s bakery,” sang the little bird. “He will not be happy with you when he sees what you’ve done.”

The eagle didn’t really care about the answer as he dropped onto the scattered pieces of the fallen pie and began to eat.

“What flavor’s this?” he asked, pecking away the crust to uncover the syrupy fruit inside.

“Strawberry,” answered the bird. “My very favorite. And you’ve now ruined two of them.”

“Very fine, I must say,” stated the eagle while tossing bits of crust left and right. “There are always some losses for every gain. Who is this person who makes these desserts?”

“It’s Leo, short for Leonardo,” answered the songbird with pride. “He was born in Poggibonsi, a village in Italy.”

“And who are you?“ asked the eagle as he scanned the bird from nail to beak. “Caught by the baker?”

“I wasn’t caught. I was born in this very cage, and see myself as an inspiration for my master’s talents. He brings me to the bakery from home every day to sing for him as he rolls the dough and mixes the preserves.”

“And what do you get for your efforts besides imprisonment?” questioned the eagle, still munching.

“I get to live with him and his family, and listen to their conversations, and hear them laugh...and sometimes cry,” stated the songbird with much delight.

“So you’re their entertainment?” asked the eagle. “You sing to maintain your home within a cage? You’re either a servant or a slave!”

“Not at all,” answered the songbird. “I’m given license to sing whatever I choose to sing and the freedom to listen to the stories they tell and the music they play at home, as well as to participate in their gatherings.”

“And that’s the only payment for your efforts? A swing, a water dish, a few grains of seed and a cage to keep you from flying away?”

“There are rewards,” maintained the songbird.

“Rubbish!” said the eagle, now finished with his pie and looking for what else he might enjoy.

“I’ve a question for you, Mr. Eagle. What is it that you care about and enjoy most in your life?”

Without hesitation, the eagle responded, “My freedom, of course! To fly wherever I want, see whatever I wish, and listen to everything I choose to hear and enjoy all there is to love about life.”

“That sounds nice,” said the songbird.“Do you have any family or friends?”

“I’ve sired many broods, and have outlived all my mates. Since my last one passed on I’ve wandered, but still come back to my last nest every mating season.”

“And friends...?” asked the songbird.

“I’ve won each battle for a mate. That’s about as much contact as we male eagles have. I’m still the strongest male I’ve seen, and my desire for yet another mate has waned—too much of a bother.”

“I’ve never had a mate,” said the songbird. “My mother died soon after I was born. I had two sisters and a brother, but then I was given away, along with my cage, to my master and his wife. They’ve been good to me.”

“Hah!” exclaimed the eagle. “You’re a captive and dependent on people who provide you with a bit of food and drink, and clean filth from your cage.”

“I see myself as a valued member of the baker’s family, and of great help to him and his business. We often sing together while he works, and I’m proud of being with him when he greets customers and asks me to sing for them. They purchase more of what he makes because of me... and they also bring their friends.”

“Do you ever get outside of this tiny cage?” asked the eagle.

“Now and then, but I’m comfortable here. At home, they also have a cat, and I fear him greatly. He’s tried several times to climb up the stand to my cage.

“And here, at the bakery, I can’t fly free...you can appreciate that with all of the flour and such. My bowels aren’t always predictable.”

“Hmm,” said the eagle as he scratched his head while thinking. “Where is that baker of yours?”

“His apprentice isn’t in today, so he had to make deliveries himself after he finished making the pies.”

“Any chance I could convince you to see the world outside for yourself?”

“Outside the bakery?” questioned the songbird. “My wings aren’t very strong, and I may not be able to fly very far...”

“Don’t be silly. I can carry you on my back. All you’ll have to do is dig your claws in and hold on to my crown feathers with your beak.“

“My master will be upset if he finds me gone when he gets back,” mused the songbird.

“How long do the deliveries take?” asked the eagle.

“A few hours at most and he left here just before you showed up.”

“Oh, come on, get over it. We’ll be back well before the baker does. He’ll never know you left.”

The eagle hopped onto the cage, and while holding onto the wire bars with his talons, he used his beak to pry open the door.

“Alright!” said the eagle as he dropped to the floor and looked up at the smaller bird clinging to his perch. “That was easy. Now you’re free!”

The songbird wasn’t too sure that leaving his cage was a good idea, but the eagle kept after him.

“Let’s see if you can fly even a little,” he persisted. “When was the last time you even tried?”

Before the songbird even had a chance to reply, the eagle continued his coaxing. “If you can’t fly, I’ll just lie here on the floor and spread my wings out, and you can just drop down onto my back...”

But by the time the eagle had finished his suggestion, the songbird had hopped over to the perch at the cage door, few forward and executed a perfect arc around the room, landing on the window sill next to the remaining pie.

“Well done!” said the eagle, surprised at the agility of the small bird.

“I know from listening to others that even without much practice we canaries can fly for as long as thirty minutes before having to return for nourishment and rest.”

“Then I won’t worry about you falling off my back and hurting yourself while we’re on our journey.”

“If I’m going with you, I’ll need to eat a bit of seed before leaving... just in case you drop me,” said the songbird, quite pleased with himself for the quality of his flight, and in showing a bit of hubris in dealing with this vain bully.

“While you’re enjoying your seed, I think I’ll have a few more bites of strawberry pie,” responded the eagle, returning to the sill and defiantly pecking into the remaining undamaged pie.

“You are not a very nice eagle,” thought the songbird, already feeling regret for responding to the challenge offered by the much larger bird.

After finishing his feeding, the eagle looked towards the cage and then glanced to the outdoors beyond the window and said, “I’m headed out. When you’re ready, just fly to me and land on my back. Then we’ll get started.”

“Where are we going?” asked the smaller bird.

“Out to see MY world. The one made up of mountains, fields and tall trees, with a sky that’s endlessly high with clouds like marshmallows, and lakes so wide they curve against the horizon.”

“All that in less than two hours,” thought the songbird, excited by the prospect of testing himself in a world unfamiliar to him and much larger than the one he’s known.