CHAPTER THREE – Back at the Bakery 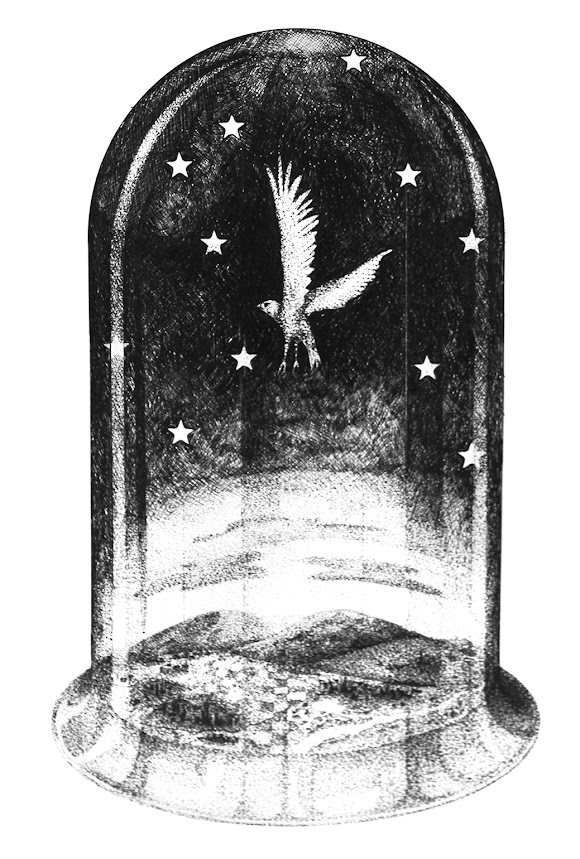 The eagle landed on the gate in front of the bakery. The songbird flew from his back and perched near him on the fence that surrounded the building. Since the small bird did not see the baker’s truck, he knew that he had made it back before his master would have found him missing,
“I most appreciate the trip you took me on, Mr. Eagle,” said the songbird. “I saw everything I could ever have wished to see...and more.”
The eagle puffed out his chest and scanned his muscular body and wings folded at his side. “So now you see what it’s like to be me... free to fly anywhere I choose, at any time.”
“Yes, Mr. Eagle. I’ve learned a lot along our journey.”
“So then you can agree with me that my way of living is far better than the one you live...within that cage.”
“I do not believe that to be true, Mr. Eagle. I understand that your life’s very different from mine, but not in any way better,” answered the songbird.
“After seeing what you’ve seen today, and how I live, how can you even imagine any comparison of your life to mine?”
The songbird thought for a moment before answering. “I’m not like you at all, Mr. Eagle. I’m small and frail in comparison, and would never be able to fly the great distances you fly, race against airplanes, or soar over mountains.
“I admit that yours is an exciting life, one that, prior to our journey, I could never have imagined. But I also learned several things that give me more appreciation for what I have and, maybe even more importantly, who I am.”
“And what, pray tell, would they be?” questioned the eagle.
“I have sometimes thought of myself as you see me—weak, unworldly, and perhaps of little worth. Those around me accomplish great things, while all I can do is entertain a little.
“Today I discovered several things about myself, the first being that I’m not as weak as I’ve often thought myself to be. The second is that I can learn quickly and use my abilities decisively and effectively.”
“WHAT?” squawked the eagle. “You did absolutely nothing but hang on to my back, as I flew you place to place.”
“That may be as you see it, Mr. Eagle, but I see our adventure quite differently,” retorted the songbird, as he continued his version of the day’s events.  “I also learned that there is way more to life than speed and strength, as well as how small we really are, no matter what our physical size.”
“By that, you mean what?” asked the eagle.
“When looking down from on high at the people rushing about their lives, I could imagine that my tiny foot could crush them, and that few would notice they were gone, unless someone cared enough for them to mourn their loss.
“I also learned that despite the keenest sight, and quickest mind, those in possession of natural skills often aren’t wise.”
“And to whom are you referring?” asked the eagle leering at the little bird.
“No one in particular,“ the songbird responded. “Just an overall observation... of how one can judge another negatively for his or her flaws, rather than appreciating and understanding the assets and abilities the other may offer .
“So I very much appreciate the opportunity to see the world through your eyes, and learn your point of view.”
“Oh!” answered the eagle. “You’re thanking me for showing you how much better I am than you,”
“In a way, I guess I am,” responded the songbird.
“You are very welcome,” said the eagle, at which moment both birds heard and saw the bakery truck turning the corner to the shop.
“I must go, Mr. Eagle, and so must you!” exclaimed the little bird, whereupon he flew off the fence, though the open window, and into his cage.
Meanwhile, the eagle unfolded his wings and flapped them as quickly as he could, struggling to fly, but not fast enough to escape the baker’s wrath.
Quickly pulling to a stop by the gate, the baker grabbed a rolling pin and began swinging it wildly at the flailing bird, getting in a few strikes before the eagle could untangle himself from his own long wings and gain enough height to flee.
For some moments, the baker screamed and cursed and shook the rolling pin in the direction of the eagle before racing to the bakery door.
Once inside he immediately saw the mess of his pies on the floor and then hurried to the cage where the songbird was swinging on his swing and singing the baker’s favorite tune.
“Are you alright?” he shouted as he saw that the cage door was open. He glanced at the sill and the pie lying outside on the grass.
“You are a lucky bird,” said the baker as he went to the closet for a broom and a mop. “He could have done you great harm, and I must be more careful in the future.”
The songbird continued to sing as the baker finished cleaning up the mess, happy for his master’s concern, and proud of himself for the bravery he had exhibited earlier.
At the end of the day, the baker covered the cage and brought the songbird home to the family, and told the tale of his confrontation with the “largest eagle that I’ve ever seen!” The songbird listened as the baker described the many swipes he’d gotten in on the eagle, a much larger bird in the telling than in real life.