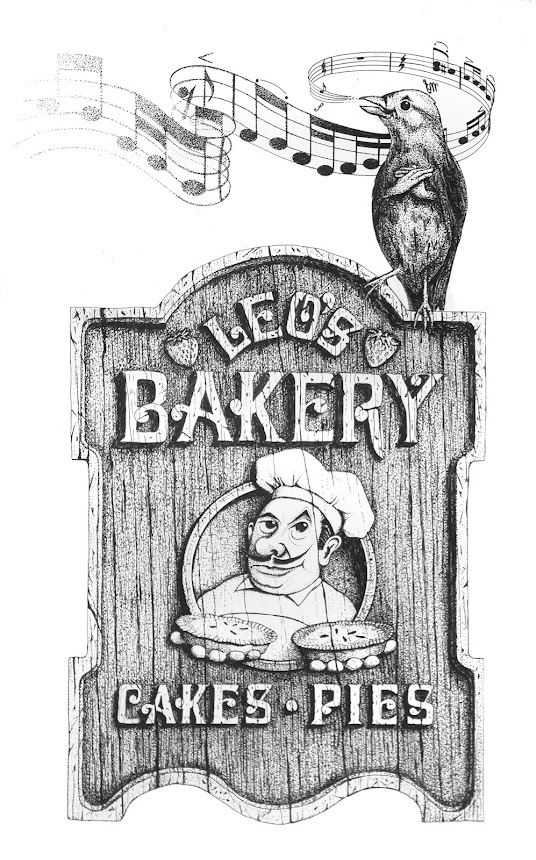 “Have you ever been to the city?” asked the eagle as the songbird lead him to the knoll where he had landed, which happened to be the highest point from which to begin their flight.
“Not that I recall. My owner lives in a small village near his shop, and he never takes me with him when he leaves on business.”
“The city’s filled with things to see and do, and has many people living in it.” said the eagle. “Sometimes it’s quite enjoyable to frighten people by casting a shadow on them with my wings. It’s a trick I learned when I was just an eaglet. Over the years, my wings have grown and now if I get into just in the right position...”
“Excuse me, Mr. Eagle. Don’t you sometimes wish to make friends along your journey?”
“Friends? I don’t have much use for friends...eagles or people. I’ve had mates and chicks to take care of, but that got tiring. And, as I said before, other eagles are always competing with me. It’s more enjoyable fighting than it is trying to find friends, especially when looking for a mate.”
“Then why did you ask me to join you on this trip?” questioned the songbird. “Didn’t you want to be friends?”
“Whatever made you think I wanted to be friends with a prisoner”
“Well, it was you who stopped by today and began to talk to me. You could have just eaten your fill of pie and gone on your way. Why did you invite me on this adventure?”
“To show you...(pause)...to show you how I live and what I get to see every day when I choose to leave my nest.”
“So you care about my opinion?”
“Well, not exactly care about it. I just wanted you to see... Just forget about being friends and get on my back and come with me. You might have some fun.”
A few miles east of the shoreline, a smattering of houses came into view. As they continued, the few houses became many along with other buildings of various shapes and sizes. The streets became longer and wider, and were filled with trucks, cars and scooters moving in all directions, along with wide sidewalks lit by traffic lights, billboards and signage.
They soon found themselves flying through a canyon of glass and steel beneath which emanated a cacophony of screams, cries, laughter and conversation interrupted occasionally by a siren, a boom or whistle.
The eagle flew to the roof of a tall building and perched on a segment of piping. The songbird climbed from the eagle’s back and joined him looking over the cornice into the windows of offices lined with computers, and populated by busy workers rushing to and fro.
“I truly wish I could hear more of what they’re saying down there and over there,” said the songbird wistfully as he pointed in different directions. “From here those below all seem like the droppings I leave, but I know from the stories told by those in my own family that each of them has a tale to tell, songs that fill their hearts, hopes, dreams and people they love and care about. It’s wonderful being able to watch them at such a height, but I know that what we are seeing is just a small part of the lives they lead.
“For God’s sake, bird, can’t you just enjoy the view?” exploded the eagle. “The city’s alive because of the millions of nameless people who’ve built it and maintain it, and then knock it down and start all over again.”
“They’re not nameless, Mr. Eagle.”
“We’re all nameless, Mr. Songbird. But most are more nameless than others.”
“I don’t understand.”
“Let me help you with that. Here I am, an eagle. And just maybe, I’m one of the grandest of all eagles. At least of those I’ve met.  Just being an eagle makes me superior to many other creatures as well as most all birds.
“And there you sit, a songbird. You live in a cage, have little freedom, and contribute little to the world besides an occasional song that few will hear. You’re much like those in that office over there. And when you die, they’ll go and buy another songbird to fill your cage.”
“That may be true, Mr. Eagle. But isn’t that the same as you? Except that my family will care when I pass on. Will anyone miss you?”
“I’m an eagle!” he stated emphatically. “And because I’m an eagle I’m more important than you. Now let’s go and have some fun.”
The songbird couldn’t understand the eagle’s logic, but he wasn’t on this journey to criticize or explain his own point of view. The eagle was being honest in how he perceived life, and without the eagle, the small bird wouldn’t have had a chance to see this part of a world so unfamiliar to him.
After soaking in the view of the city in all of its magnificence, and recording to his memory all that he could from the perspective he had at the moment, he flew over to the eagle’s back, grabbed hold of his head feathers and readied himself for flight.
The eagle stood proud as he viewed the city he knew well and then flew from his perch across the chasm created between the tall structures, out of the city, and into a suburban community distinguished by neat houses with well kept lawns, tall steepled churches, restaurants, gas stations and children’s playgrounds, and across the parking lot of a large food market occupied by shoppers hurrying from cars to the store and store to cars pushing grocery carts and carrying bags. 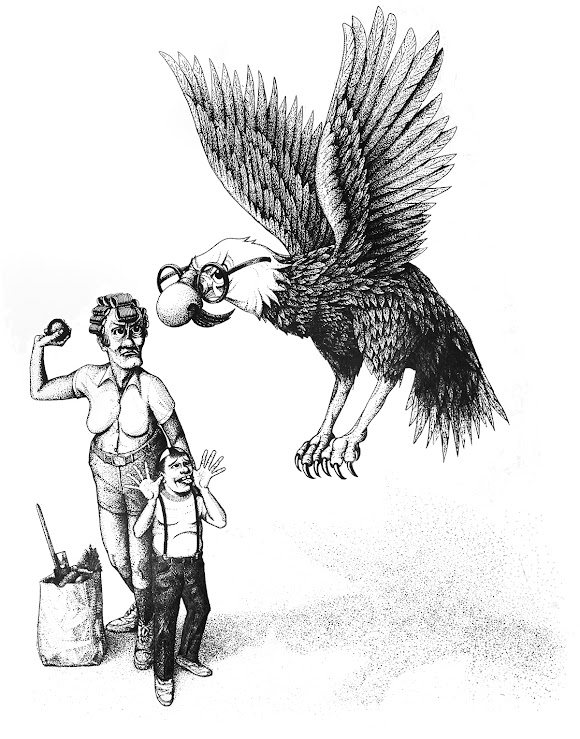 Sighting a lone woman with a child, the eagle swooped down, shading the mother from the sun with his expanded wings and  expecting her to cower. Unfortunately, for the eagle, he picked the wrong pair to approach, and instead of displaying signs of fear, she countered, grabbing fruit just purchased from her bag and pelting the eagle. The songbird, sensing danger, flew off the eagle’s back and positioned himself on the roof rack of a nearby car, as the woman’s son encouraged his mother in her fight, with other shoppers joining in.
The eagle hadn’t been prepared for the bombardment, and it put him off his game. He was far too near to the ground to rise quickly into a flight position and began to fall backwards when a large dog raced through the throng of shoppers, dragging his owner behind him.
Fearing for the eagle’s life, the songbird let out his highest note which was unheard by the crowd, but stopped the dog in his tracks, enabling the eagle time to get his bearings and struggle upward, away from the angry mob. Once he gained some altitude, the songbird left the roof rack, flapping with every ounce of power he had to catch up with the eagle now soaring far above. Seeing the songbird, the eagle circled back and flew beneath the small bird, creating a landing strip upon which the bird finally could land. 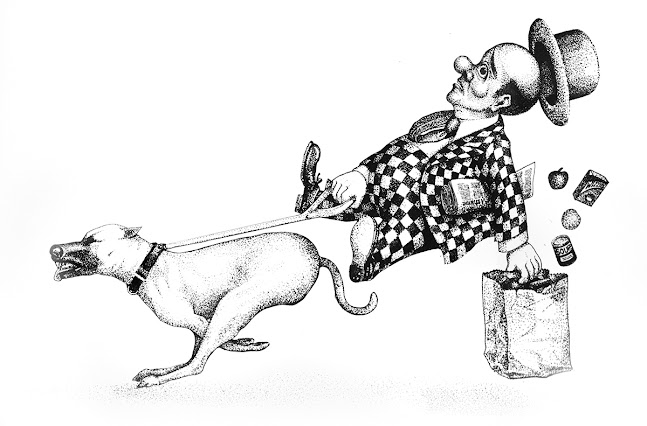 No words were shared between the two. With the noise of the wind, neither would have been heard, even if one wished to speak. The songbird knew he had saved his companion by singing at a pitch that could be heard by dogs but not by humans. He had discovered this trick one time when threatened by the family cat, and had screamed his loudest. No one in the family knew that the songbird had raised its voice, but the shriek he let out scared the cat into the kitchen and far away from the cage.
The songbird later learned that humans have a more limited range than either dogs or cats, a fact that was good to know when sharing a home with a natural enemy. Eagles, on the other hand, have excellent hearing in the lower range frequencies, but not near as high as those of dogs, cats or even humans. The eagle, therefore, had no idea why the dog had stopped chasing him, and was pleased to think that the massive canine had backed off due to fear of him, and not because of the notes sung by the tiny songbird.
Once again in open air, hundreds of feet above the earth, the eagle was in his glory, and served as a capable tour guide for the small bird who was whisked along on a journey above a rushing river to a waterfall, over a forest of giant redwoods, and into a race with an antique biplane, controlled by a pilot obviously exhilarated by the company of the giant bird flying near his wing. 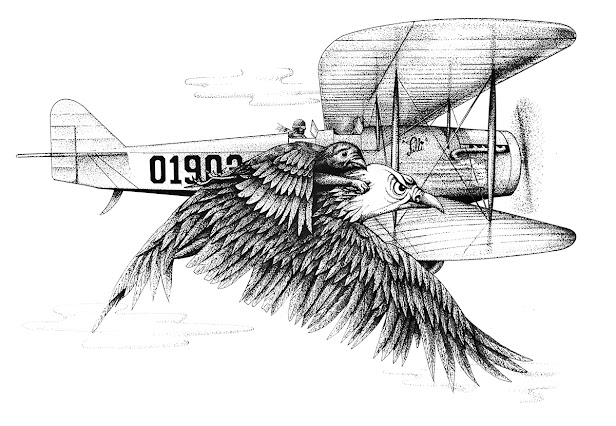 The songbird  knew that the journey would soon to be over, but was happy to have had the opportunity to experience so much of the world outside as well as to better his understanding of the tales he’d heard told by humans. In just a little more than two hours, he’d discovered a great deal about the eagle, and had used his own skills to save the giant bird from danger. He’d visited a city, flown alongside an airplane, and had followed a river from its source to its descent while traveling on the back of one of the greatest birds on earth.